Brütal Legend was sadly not so legendary 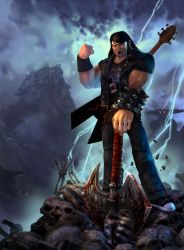 I’m a fan of Tim Schafer. Quite apart from the fact that his Wikipedia page shows him lovingly holding a jar of Marmite (good man), he’s been a writer/designer/coder on some of the funniest, quirkiest games in history: Monkey Island 1 & 2, Day of the Tentacle, Grim Fandango and Psychonauts. How can you not love this guy?

It’s a terrible tragedy that Psychonauts didn’t sell better - sure its platforming was a little ropey at times and the game was padded out in places with uninspiring sections, but buried within this game were some of the most original, funny and bizarre ideas ever to grace the medium. In what other game can you wander the deranged mind of a conspiracy theorist, a twisted suburban landscape filled with badly disguised secret agents trying to prevent you from discovering the true nature of the Milkman? Or the mind of an unexpectedly sensitive undersea monster where you, as the human representative, are portrayed as a Godzilla-sized klutz of a human, terrorising a civilised city populated by tiny little fish monsters that scream and run away from you in panic? Genius, pure genius. And yet, most gamers just ignored it, the philistines. It was based on this history, and because I felt a responsibility to buy games from people like Mr Schafer in the hope that lights like his won’t disappear from the gaming world to be replaced by more CoD / MoH games, that I bought Brütal Legend.

The Good: From an art direction standpoint, Brütal Legend is a triumph. It’s a joy just to drive around the landscape looking at the towering stone statues of guitars jutting out of the landscape, mountains of bone and metal, and the roiling stormclouds (which give a nice lightning storm sometimes too). The distinct areas have a feel of their own and fade beautifully from one to the next, and the sense of scale is always great. Their goal was to capture a world hewn straight out of the classic metal album covers and posters, and they have undoubtedly achieved that, it looks wonderful. There’s a ‘lore’ story covering it all which is suitably grandiose and over the top, encompassing demons and titans and generally fits the atmosphere very well.

Musically they’ve packed a lot of stuff in here. I’m not a huge metal fan, but there’s no doubt that when combined with the visuals it sets the tone perfectly, and I even started to like many of the tracks that I previously wouldn’t have had time for. There’s some great comedy numbers in there too - such as “Destroy the Orcs” by 3 Inches of Blood which is hysterical (“Kill the orcs, slay the orcs, destroy the orcs!!”), and whenever Master Exploder kicks in I can’t help smiling.

Comedy wise, it’s good near the beginning. The parody elements are amusing, particularly the ‘70s real metal’ versus ‘80s hair metal’ war that kicks it off. Jack Black is quite funny at times, and not as annoying as you might expect (although I don’t generally find him that annoying anyway, but he is toned down a bit here).

The Bad: It runs out of steam way too fast, in almost all areas. While the art continues to be breathtaking (and mostly why I kept playing), the gameplay elements get very repetetive with basically only about 5 types of side-missions which just repeat ad nauseum and just a series of collect-em-up achievements which get tedious once you’ve explored the admittedly sumptuous world. There just aren’t enough original ideas; the metal parodies are great right up to the end of the hair metal war, then it just repeats the same thing with a Goth / Emo style for the rest of the game and you feel they’ve used up all their jokers already. The comedy script sputters down to embers too, with Black’s lines getting ever more predictable and a tiresome, all basically variations on a theme.

I didn’t like the RTS gameplay elements either. I’m not a big fan of RTS’s anyway, but even I know they need more subtlety than this. I don’t think the console controller worked well at all, and the mechanics here were the traditional scissor-paper-stone of units (which is fine in itself) and a few control points which added little except resources, and that was it. Like the poorest of RTSs most maps could be won by just being the most efficient at working the interface, meaning you’re the first to build the biggest units and the first to capture the resource points. Since there are absolutely no advantages for terrain, nor any fixed emplacements that you can build, it basically comes down to a build-race-and-tank-rush style gameplay, which means really very little strategy in my opinion. These were sections I just tried to get through as fast as possible, which is also the best way to win. A low point.

And, although it’s amusing to see the ‘hair metal’ units mirroring the ‘real metal’ units but with garish headbands, sparkly bracelets etc, in gameplay terms this was a mistake, because it makes telling your units apart from the enemy really difficult at times. Not a problem after the first third of the game but it bothered me early on.

Conclusion: I don’t regret playing it, because it was a good experience, particularly visually and aurally, but there’s no getting away from the conclusion that Double Fine felt they had to create something with a wider appeal this time, and a more recognisable ‘theme’ that was marketable in a way their previous game wasn’t, and that that has become restrictive. I don’t blame them for taking this route - after all both Grim Fandango and Psychonauts were critically acclaimed original pieces that were hard to classify and sold relatively poorly. Brutal Legend fits a marketing strategy in a way that Psychonauts never could, you can grok it very quickly just from the imagery and it has a recognisable star. But at the same time the game definitely feels like it was stuck in its own straight jacket - it had enough ideas to take it through the first 2-3 hours confidently, and then it had just used up all of its best lines and ideas and had to find some way to string that out to 10 hours - compared to Psychonauts where they could just turn on a dime and do something completely different, the Brutal Legend world & canon seems to have become an anchor in the latter sections. The artists did a fantastic job in making enough content for that to be worth your while exploring it right to the end, but from a gameplay and writing standpoint this is not Tim Schafer’s finest hour. If you’re not specifically a Tim Scafer fan (and carry a deep collective guilt like I do that the gaming public ignored some of his best work) I’d have to say this game is worth renting just to experience the visuals, but not buying.