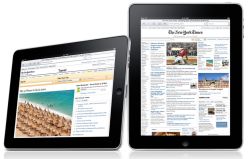 Apple’s new flagship product, the iPad, was only just released in countries outside the USA last Friday, and I was fortunate to get my hands on one on launch day. Like many Apple products, this one has divided people, with a lot of people decrying it as a device looking for a purpose, a device that falls between two stools (not as portable as a phone, not as functional as a laptop), a device that is stifled within Apple’s walled garden. Despite there already being a plethora of reviews out there on the internet, I thought I’d give my initial impressions of it after the first weekend.

It would be illustrative first of all to set out my reasons for wanting to lay down some cash on a product such as this, in order to frame the context in which I’m evaluating it. Some potentially relevant facts:

Perhaps importantly, going into this I wasn’t one of those people looking to replace another device with the iPad, but I did see it as an opportunity to use an iPad in use cases where I considered the other devices I could already use to be sub-optimal. I’ll cover those use cases later on when I discuss how things turned out in practice. So now, on to my evalution…

I’ll try not to cover too much ground that’s already been adequately covered elsewhere. You already know the iPad is fantastically well constructed, beautiful to look at, has a wonderfully bright and sharp screen (which is prone to finger prints) - we’ll take all that as read. In my opinion, it’s not that heavy, but if you had planned to hold it up in front of your face with one hand for a long time, yeah that’s going to get uncomfortable. Personally, I don’t do that - like when I’m reading a book of any size, I rest the iPad on my lap, either flat or just propping it up on edge with one hand, and that’s fine for several hours in my experience. Having said that, the sleek and smooth exterior means you can be afraid of dropping it - however I’m using it in a leather flip-case (I’ll cover that in a future post, it’s a good one), and in this configuration gripping it becomes a total non-issue.

The screen was sharper than I expected, it seems to have approximately the same pixel size as my MacBook Pro, since even though the resolution is lower, the screen is only 9 inches. The default brightness setting was a little dark for me so I tweaked it up to about 75%, which was perfect. It’s a glossy screen which you may have problems with outside, but inside in full daylight (we have many windows in our house) and using regular lighting at night, reflection has not been an issue.

As has been pointed out, there are no cameras. Personally, that’s not something I care about - I don’t use my mobile phone camera either and I have a far superior camera within 10 feet of me in my lounge if I need one. I can imagine a camera for video conferencing might be useful to some people, but I’ve had one in my MacBooks for 3 years and I’ve never used them, so really, this is not important to me.

Connectivity wise, we’re talking minimal - just a dock connector and Wifi. It would have been nice to have a USB slot or two and especially a SD card slot (although you can get an adapter for that), but anyone who’s bought an iPod before knows the Apple way - don’t try to do everything, just try to do the core things better than anyone else. So, did they manage that?

I’d sum it up on one word - ‘butter’. The fact is that the iPad comes with only a small piece of card of instructions (and bizarrely, a 300 page downloadable manual which I don’t think they expect anyone to read), and you don’t even need to read that. Seriously, a monkey could work this thing, and it wouldn’t even need any training. I consider myself a geek still, and some geeks seem to find user friendly experiences offensive, as if it undermines the skills they’ve acquired, but I’m not one of them, and I admire what’s going on here. It’s a very direct, tactile experience that rewards experimentation and exploration, and just says “hey, come play with me, I won’t bite”. This, frankly, is how systems should be designed.

The lack of multitasking (due to be added in OS4 later in the year) is much less of an issue than I expected. Apps remember where you were, and tend to launch fast so switching between, say, Safari and an email that you’re in the middle of writing, works just fine and feels no different to true multitasking. The only thing missing is if you have apps which need to actively do things when you switch - such as IM or voice messaging, or music players other than the built-in iPod features. But honestly, so far I’m not missing it, even though I can imagine it being useful in some cases.

Many have said this is a bigger iPod Touch. They’re right, but in the same way that a bay window is just a bigger porthole. If you think that doesn’t matter, maybe you wouldn’t mind replacing all the windows in your house with portholes. In my opinion, the size of this device is absolutely perfect - for the purposes use it for (see below).

So What’s It Good For?

These are the primary things the iPad is being used for in our house:

The important thing is that none of these things could be done as well with devices of another form factor, IMO. You could do them, but you’d be compromising something - such as screen space, comfort, instant accessibility. I think a pad form factor hits a sweet spot for these things, and that Apple’s implementation is confident and slick. In the end, that’s all I really wanted.

My personal opinion is that there definitely is room for a device of this form factor in the lives of many people. You can argue that iPad version 2 will have more features, or that an Android tablet (whenever they arrive in a product form) will do better later on and will have more apps because of the open architecture, but  I think the phrase ‘a bird in the hand is worth 2 in the bush’ is relevant here. In technology, there’s always going to be something better in the future, that’s a universal constant at any point in time, for any product. Right now, the iPad pushes exactly the buttons I wanted it to push - that doesn’t mean there isn’t potential for more, but what it does do, it does extremely well. And more importantly, it does it right now, not at some theoretical point in the future. That has value to me.

Perhaps the best illustration is that the iPad has been in pretty much constant use since purchase, barring when it’s on charge, and so far the split has been 70/30 in favour of my wife, whose review comments are simple: “It’s cool”. I concur.