On the idolatry of investors 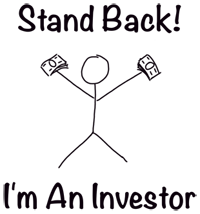 It’s seems you can’t tune into any sort of political debate on the economy these days without a glut of commentators and politicians lining up to tell us how all our problems can, nay must, be solved by ‘attracting investors’. We must do everything we can, we’re told,  to catch the eye of these incredibly elusive and rare beasts, who are constantly on the move and always on the lookout for the juiciest pickings. They’re a different breed from us if you’re to believe the breathless accounts of expert observers; by all reports globally mobile, notoriously fickle and with the patience of a three year old after three tubes of blue Smarties. Miss your chance by making things hard for them - common faux pas by the poorly prepared include having labour laws and asking them to pay some tax - and they’ll breeze past your metaphorical begging bowl and on to more attractive opportunities. The only answer is to prostrate yourself at the feet of the investment cadre, regardless of whether you have to slash other things like health and education to do so, because if you don’t your destiny is destitution anyway. Or so the narrative goes, admittedly dressed in slightly more palatable phrasing. You’re not supposed to question this, it’s part of the doctrine of the Priesthood of Economics.

Now, having investors ready to fund business ventures is unquestionably a good thing. But if you think that this particular breed of gadfly investor - the straw man most often constructed by financial middle men and right-wing politicians in order to sell a particular philosophy - is the root of the majority of new businesses, then you’re very much mistaken.

Let’s talk fundamentals for a second. In order to launch a business, which I think is universally accepted as the engine of economic prosperity, you basically need 3 kinds of participant:

These 3 roles are pretty much fundamental, and investors are clearly present: but are just one third of the recipe. The inference by some of the narrative I often hear is that while investors are rare, precious and indispensable,  the people in the other two roles are not - if the money’s there, then we can surely rustle up people to do the other jobs, they’re almost two a penny. This is, of course, nonsense. People with good ideas, and people who can execute well on ideas to create a great functioning business, are at least as rare as the investors who would fund it, and in my opinion even more so.

My second point is that if you can do without any of the 3 roles, it’s actually the investor. It’s impossible to launch a new business without ideas, and without execution - nothing happens without these two things. But particularly in the technology space, it’s getting easier and cheaper to launch your own business thanks to cloud services, easy access to global distribution platforms, and the pace of change regularly giving great opportunities to newcomers, and often external investment just isn’t necessary in the early stages. Maybe you’ll scale using external money later, maybe you won’t - with a lot of successfully bootstrapped businesses, it often seems like they’re letting the investors on the bandwagon later not because they actually need the money, but because it’s literally being thrown at them and saying no gets boring after a while 😉

And those businesses who do launch with initial seed investment, do they get it from these nomadic global investors who only glanced their way because the economic environment was designed specifically to attract them? No. Almost exclusively they get this seed money from family, friends or business angels, people who invest because they see the potential of the idea or the people, and who are usually located in the same rough area already.

So what’s my point here? It’s that the political and economic narrative is regularly at odds with the reality that at least - at least - two thirds of the engine of economic prosperity in a community comes from its own internal resources. The kids who might grow up to have great ideas, or become really great at executing on those ideas. The kids that can build new businesses and create an engine of their own prosperity. Too many times we get caught up in a fashionable chase after the globally nomadic investor class, at times sacrificing the things that benefit the local populace in an attempt to pimp ourselves out in return for what often turns out to be frankly modest and, more damagingly, short-term returns whose conditions tend to worsen over time.  The actual effect on lasting prosperity within a community of courting fickle global investment is highly debatable - not only is the majority of seed funding for new business generated from local rather than global sources, but this funding also tends to be much ‘stickier’ - it doesn’t tend to evapourate at the first sign of difficulty, or in the face of slightly better terms available somewhere else.

Let’s think less about global fly-by-night investors, and more about the people with ideas, the people with creativity and powers of execution, and the at most the local angel investors who are here already and don’t need to be attracted with coy waves of a Geisha’s fan. The long-term returns are better anyway.

(With apologies to XKCD for my blatant imitation)