A quick post today because I didn’t find an easily accessible reference for building Git from source on Mac OS X El Capitan, and I needed to. Maybe there’s another post out there just like this one, but I didn’t find it, so maybe this will be useful in future for those who similarly come up short on Google. After you’ve cloned the source from https://github.com/git/git, open up a terminal. I’m assuming you’ve got Xcode installed, and that you’ve already installed the command line tools - if not, execute this on the command line now:

Because SourceTree has continued to support versions of Mac OS X back to 10.6 (Snow Leopard), we’ve still been using the ‘springs and struts’ approach to user interface layout up to now; we couldn’t adopt the newer Auto Layout without restricting support to 10.7+. So I’ve only just started experimenting with Auto Layout recently, and I ended up getting stuck for a while on something that seemed like it should be really simple, and yet I couldn’t find any hard information about it on Stack Overflow or via Google: how to specify tab ordering.

This week I implemented a much-requested feature in SourceTree for the upcoming 1.3 release (beta 1 went out on Monday, this will make it into beta 2) - a command-line tool so you can quickly pull up SourceTree for the repository you’re in from a terminal. Writing the command-line tool was trivial, but when I came to implement the menu item which would install it in /usr/local/bin, which inherently needs privilege escalation, it turned out to be a lot more complicated than I expected.

A common requirement in any Cocoa application is a preference pane style window where each toolbar item switches to a different view in the main window, resizing as necessary. I’ve used BWToolkit to do this in the past, which provides BWSelectableToolbar. However, there are a few issues with using BWToolkit: If you want to deploy on the Mac App Store, You have to customise it to remove all uses of private methods, since those are banned on the App Store.

Since I’m trying to spread this news as far and wide as I can, I might as well say it here too 😀 Since the approval light just went green on the Mac App Store, I’m happy to announce the launch of SourceTree 1.2! In celebration, I’m having a crazy-bonkers 40% off sale just for one week, so get it while it’s hot! There’s loads of things that are new or improved in this release, but here are the headlines:

Mac user base by country: my figures so far

As many of you probably know, almost a year ago now I decided to take the plunge and move my primary development activities to the Mac. I taught myself Objective-C, got properly to grips with Cocoa at last, and started a new Mac OS X-specific project which would eventually become SourceTree, learning a ton along the way (a process which is by no means complete!). Happily, things have turned out very well - SourceTree continues to sell, reassuring me that there’s enough interest out there for me to keep expanding and improving it (I’m looking forward to getting the next major release in people’s hands soon), and I’ve also been getting some Mac/Ogre-based contract work which I’ve enjoyed a great deal.

I’m pleased to announce that I’m finally ready to make my first fully-fledged commercial Mac OS X application available to the world! SourceTree is a user-friendly Mac OS X front-end for Mercurial and Git, the two most popular distributed version control systems used today. The goal was to create a single tool which could deal with both systems efficiently, and to give a developer quick and intuitive access to the things (s)he needs to just get on with building software. 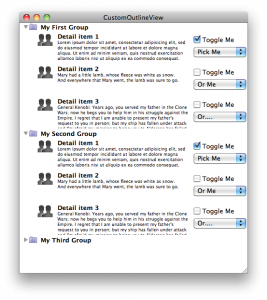 I only started learning Objective-C and Cocoa in mid-May, and for the first time I think I actually have a tip to contribute to the wider community. It’s about using custom cells in NSOutlineView, but those which you want to design inside Interface Builder rather than drawing manually.

If you’re an iOS developer, you’ll be wondering why this deserves a blog post - it’s easy to do in Cocoa Touch! Well, yes it is easy on iOS, because Apple have specifically allowed you to design table view cells in Interface Builder. When targetting Mac OS X though, it’s actually pretty awkward, and here’s why: in Cocoa Touch, the class which draws the cells in a table is UITableViewCell, which is a subclass of UIView - meaning you can drag one onto the canvas in Interface Builder and lay stuff out right there. In Cocoa, in contrast, the cell is simply represented by NSCell, which is not an NSView subclass. This means Interface Builder will not let you play with them, you draw them by implementing drawWithFrame:inView: instead. I think Apple realised the problem with this design in time for Cocoa Touch but obviously felt they couldn’t break the existing Cocoa interfaces. There are also many differences between the instantiation of NSCell versus UITableViewCell - there’s only one NSCell for all rows in a table / outline view, compared to a type-indexed pool in Cocoa Touch.

The problem boiled down to this: if the contents of your table / outline cell is non-trivial, or if you just don’t want to write a bunch of layout code, it’s a PITA to implement a custom look in NSOutlineView, such as the one in the picture, especially if you want custom controls embedded in it. For my current Cocoa app, I really wanted to design my cells (and I have 2 different styles for group levels and detail levels) in Interface Builder to save me hassle, including using Cocoa Bindings to hook up some dynamic fields within. Many internet searches later, and mostly the answer I found was that it couldn’t be done. Luckily, I’m too stubborn to take no for an answer, and eventually I figured out a way to do it. Details are after the jump, with an example project to show it in action.

I came across a couple of interesting issues when I came to do the first pass of writing the text for the user-visible strings I’d been setting up for a Cocoa app I’m writing (painfully slowly as I learn the nuances of the environment), and I thought I’d share them. Full details are after the jump, since I’ve embedded a large script in the post.

The basic principle for text localisation on OS X is that, like most systems, you externalise your user-visible strings in string tables and reference them by keyed aliases in code - in this case using NSLocalizedString. Apple provide a tool called ‘genstrings’ which extracts all these into a template strings file called Localizable.strings which you can then populate per language - localised files are kept in folders called en.lproj, fr.lproj etc and helpfully they’re picked up by default like this.  So far, so good.

Taking a bite of the Apple

Giving up the leadership of OGRE was a sad moment for me, but in hindsight it has also been rather liberating. For 10 years I’d spent most of my energy on OGRE or on projects that were related to OGRE. There was an implicit understanding both from the community and from myself that everything I embarked on would in some way tie into OGRE - and indeed my business has always been based on a constant balancing act between how I can make a living while also promoting and advancing OGRE.